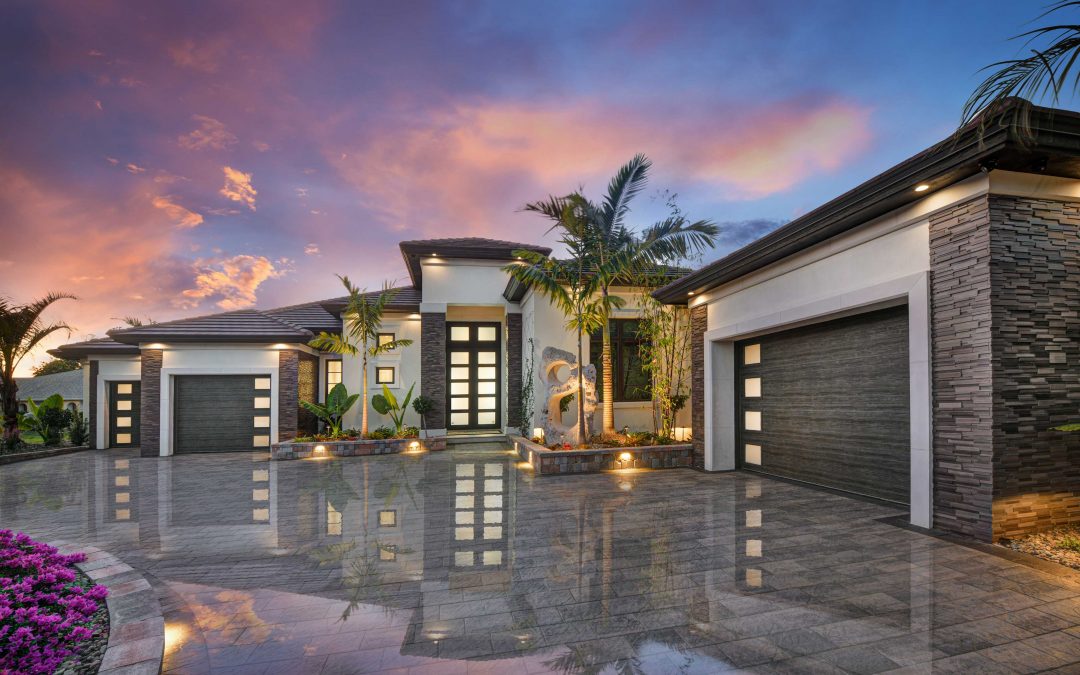 CAPE CORAL, Fla. (Jan. 24, 2020) — Koogler Homes, Inc.’s Modern Jewel model home earned 10 ACE Awards — including top honors — during the Cape Coral Construction Industry Association’s Showcase of Homes awards gala on January 16th. Seven of the awards are for Category 13 — which applies to homes priced at $1.5 million and higher — while the remaining three are best overall awards for the showcase:

A 6,895-square-foot home, including a 2,000-square-foot, air-conditioned lanai, the Modern Jewel ¬— located at 4312 SE 18th Ave. in Cape Coral — is the gateway to three bedrooms, 4.5 bathrooms, and a plethora of ultra-modernity and “smart” technology.

The property is paved with light-fixture-decorated stone and complete with entryway-leading, lush landscaping. Every inch of the interior is filled with pure neutral colors and splashes of gold — from wall art, to the butler’s pantry backsplash, to the stone-encased and granite-lined entertainment center as well as the mosaic tile surrounding the master bathtub and crystalized vessel sink in the guest bathroom.

“Smart” technology includes touch-keypad- and remote-controlled window shades, shower handles and light fixtures as well as LED-lit, multicolored showers, customizable picture-frame TVs, an App-monitored refrigerator and a stove that stores recipes.
The man cave that leads to the lanai features a 155-inch TV that can split into four screens, while the lanai itself contains 42 seats, a bar and lounge area with a fire pit, pool and spa area with a full view of the canal, and a 145-inch TV screen — directly under a cypress wood ceiling.

“We’ve created a masterpiece unlike any that’s ever been built in this industry and this market, and people will surely notice that right away,” said Don Koogler, President of Koogler Homes. “They’ll see things that give luxury an entirely new meaning and provide a fresh perspective into indoor-outdoor, open-concept living.”

Southwest Floridians and visitors can view the Modern Jewel from January 24th through January 26th and January 31st through February 2nd. Open house hours for the showcase are on Fridays and Saturdays from 10 a.m. to 5 p.m. and Sundays from noon to 5 p.m. Only Koogler Homes is offering extended open house hours for the Modern Jewel on Saturday, February 1st, from 10 a.m. until 9 p.m., as this home is even more spectacular after the sun goes down.

Koogler Homes’ founder and owner Don Koogler is a master craftsman who has been creating luxury residences in Florida since 1996. He moved from Iowa, where it all began, at the age of 12. In his spare time, he helped his father and grandfather in the remodeling business, initially cleaning up worksites and later graduating to renovations. At 19 years old, he decided to focus on new-home construction. Stepping out from underneath his dad’s wing, he launched Koogler Construction. When he moved to Southwest Florida, he had 25 years of new-home construction under his belt. He then launched a homebuilding company and refined his focus exclusively to custom homes.